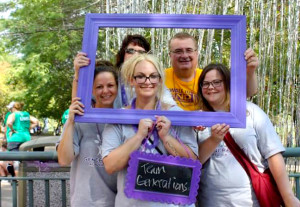 Generations at Rock Island supports the fight against Alzheimer’s and dementia.  Every year they assemble a team and get to work on brainstorming ideas about fundraising efforts to make their participation in the Walk to End Alzheimer’s a success! Generations at Rock Island is one of the hubs of Generations Healthcare Network’s Alzheimer and dementia wards.  Though all facilities offer residents care for these illnesses, they have a special unit and program that helps individuals to maintain optimal level of independence and quality of life in a secured and safe environment.

The Alzheimer’s Association has sponsored a walk that focuses on raising awareness on the battle of Alzheimer’s and fighting to the end the disease since 1989.  In 2015 more than 50,000 teams participated in more than 600 Walks across the country, raising more than $75 million.

On September 16th, the Generations at Rock Island team participated in The Walk to End Alzheimer’s at the iWireless Center in Moline, IL. They had a vendor table and were the exclusive sponsors of the photo station- a new and exciting attraction this year! Attendees, staff, friends and family could not have asked for a better day.  The crowds were big and buzzing with excitement.