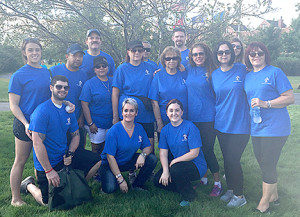 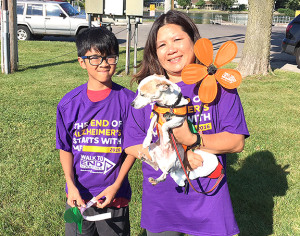 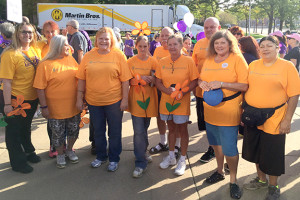 On Saturday September 17th three of our facilities- Generations at Rock Island, Generations at Regency, and Generations at Neighbors participated in the Walk to End Alzheimer’s.  Our facilities prepared weeks before by fundraising for the walk.  Each individual facility set a financial goal and worked towards that goal in various ways.  Generations at Regency hosted a series of $5 drawings for “pie in the face.”  The drawing consisted of the winner picking from 10 department heads who they wanted to pie.  It was a messy but delicious treat!  They also set up donation jars around the facility as well as sold Alzheimer’s bracelets for $1, wacky scrubs day for $2 and grill out day with hot dog and chips for $3.  Generations at Neighbors hosted a raffle and special corn boil to raise funds for the walk and Generations at Rock Island also held various fundraising efforts throughout the facility.   All facilities also promoted their fundraising efforts on Facebook and Twitter.  These three facilities are the hub of Generations Healthcare Network Alzheimer and dementia wards.  Though all facilities offer residents care for these illnesses, the three facilities has special units and programs that help individuals to maintain optimal level of independence and quality of life in a secured and safe environment.

Lorrie Butler, the administrator at Regency remarked, “This walk and our fundraising are super important to me and my facility because a large population of the patients we care for has Alzheimer’s.  Our Alzheimer’s unit works hard to ensure our residents are comfortable and get the best care possible.  We walk for them.”  Andrea Jacobs the Director of Marketing at Generations at Regency reflects on their participation.  “What a beautiful day it was for such a fun and important event!  Every year our team strives to achieve a higher goal, not only for monetary but for the awareness of this disease. We are already brainstorming for next year and we can’t wait!”

Brianna Sands, Director of Admissions at Rock Island was overjoyed and excited about the role her facility played, “we were sponsors of the Quad Cities edition and over 1,000 participants walked.  It went very well and everyone had a great time.”